From the whip, snap of Stupid, to the robot-voiced Stop, the new Wrangler album, White Glue, is a return to a joyful pulse of electronic beats that you may not have even realised you’ve been missing in synth-based music the past few years.

There’s a clarity and precision to the sounds on this album that suggests the hours of playing live in the studio have allowed the trio to hit their mark and prove what the collaboration between three top musicians (Stephen Mallinder, Benge and Phil Winter) sounds like. Where previous album, LA Spark was a deep dive into the frayed edges of the synthesiser bank, White Glue is purer and even more playful. And it’s this clarity and enjoyment that really defines the whole of White Glue. Even in the name-calling, sweary lyrics of Stupid (with it’s excellent video from Chris Turner & Tash Tung shot at Dungeness) there’s still a pleasure to be gotten from the music. 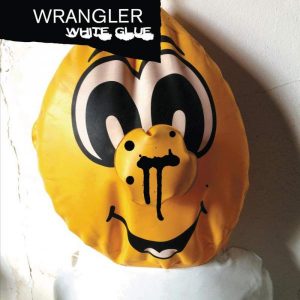 Tracks like Stop, with its curving bass line and Mal’s breathless call to reduce personal consumerism feels somewhat like a plea to the converted though. Thankfully you won’t hear Wrangler banging out of soundsystems across sun-kissed beaches. Lyrics like, “Stop buying shit that you don’t need,” is less an anthem for a new generation than a reminder that there’s more than one way to live in this society. Where some bands might have gone for the heavy-handed obvious route, Wrangler place the lyrics under a coat of vocoder-treatment. If you want them, they’re there, but they won’t bother you if you don’t want them to. This isn’t a band that goes for the obvious route.

And so it is with Alpha Omega. From the plinking water-droplet-like opening that suggests a track going in one direction to the bass line that kicks in and the robot-voiced lyrics, bringing a low level menace from the speakers, taking it in another direction completely. Alpha Omega feels like the closest to a dance track on the album, appearing in DJ sets in the better quality clubs in the coming months? Hopefully.

Colliding is hypnotic repetition with just a hint of Jean Michel Jarre in there, but played loud is a pleasure at the end of the album. If like me, you’ve got it on random play, it’s worth making sure you set this as the last track. Like a nice cool drink of sparkling water after a bottle of heavy red wine, it clears the palate perfectly. Hopefully preparing your ears for the album of remixes like the recently released Sparked: Modular Remix Project.

Sleaford Mods have always, in their short career, precariously walked the line between fresh, new perspectives on the current music scene and lad culture nostalgia. Their stripped down electronic beats not really fitting in snugly alongside the other pop culture references of many of their 40s something (mostly male) audience (Paul Weller on the next Sleaford Mods track?), but at the same time, there’s obviously more going on than a lukewarm Britannia looking back in anger towards the 90s. Of course, this is part of their appeal. There’s something for the middle-class agit-pop intellectual and the chippy with a chip on his shoulder. But what Sleaford Mods aren’t is anyone’s fools.

If you think you’ve nailed down their schtick, you’ll find they’re already one step ahead of you. With lyrics like those of new single TCR (Total control racing), taking in everything from pregnant mothers, Ena Sharples and the dangers of being a wine connoisseur in a working class world (rioja, fact fans) and the cod-nostalgia of the Scalextrix game TCR of the title and what it means to be a real man, there’s something for everyone.

All of this presented in a deceptively simple video from Simon Parframent, that, like the bands’ lyrics, is more complex and stylish than a first cursory viewing would suggest.