Festivals can be lonely events. Whether you’re knee deep in the back end of a tight crowd of music lovers, or sitting listening to a band twisting electronics and drawing out notes that have no right to exist in someone’s throat. Ultimately, all you have are your own thoughts reflected back at you. So it’s important to make sure you find the right stimulation to trigger those thoughts. Resonate does the job, taking place in Belgrade, Serbia: a city with enough architectural glitches and emerging potential to please any digital creative with a passing interest in the haunted spaces of the future past.

Mixing hands-on workshops with talks and live music events in the evenings, it can feel like a hack-fest or hipster party at times. Like many parties, this one is often a slightly shambolic affair. A point that can both endear and infuriate attendees.

All that aside, this year’s festival showed some real signs of leaping forward and getting to grips with its place in the media arts landscape. For one thing, there’s the first official festival exhibition.

The workshops are the thing which gives the festival its focus on creators, rather than, say, curators or critics. Hands on opportunities to work with a range of the more well known figures in the digital world.

Joanie Lemercier and Juliette Bibasse’s workshop on manipulating light to transform reality, took attendees on a journey to discover the mechanisms of our visual perception, coupled with the possibilities of using coding to manipulate reality. In other words, transforming “physical 3D and 2D objects into canvases with an artistic approach.” Elsewhere in the elegant, slick architectural space of Belgrade’s Kinoteka, Andreas Müller was hosting his brilliantly named, “I am a one trick pony, come and learn my trick!” workshop. The blurb promised: “This workshop consists of concrete examples of how to use noise to achieve your dreams, or failing that, make things real pretty.” More power to humour in the digital arts.

Anything that name-checks Guy Debord wins my support, and so it goes with James George and Alexander Porter, with their Exquisite City workshop lasting a full three days. Students captured 3D data scans of buildings using photogrammetry. This information was then joined together to create an virtual city block. The Exquisite City idea, building from the ideas of psychogeography and the practice of Dérive to create a digital exquisite corpse ( an idea originally devised by the surrealists). The final result was like Heironymus Bosch had discovered World of Warcraft.

Curated by Nora O’ Murchú, the exhibition at G12 Hub gallery, The New Black presented pieces from Alexander Porter, Eva Papamargariti, FIELD, Isabella Streffen, NORMALS in collaboration with V3GA, Rick Silva and Sabrina Ratté. The work was a response to a narrative written by O’ Murchú, looking at the alienation of the worker, particularly in the creative industries, where there can often be a blurring of the line between work time and non-work time, when the tools for both are the same artefact. Some of the work in The New Black explores this potential psychosis. A thoughtfully curated exhibition, where the subtlety of work such as Kim Asendorf’s piece is a reminder that the digital doesn’t have to overwhelm and bombard the viewer, to have meaning.

On the official opening night, the music comes from, amongst others Lichen. Ricocheting his sonic sweeps and zen-like audio compositions across the cavern-like ceiling of Drugstore. One of the delights of Resonate is their ability to find the most obscure location for gigs. Drugstore is a seemingly abandoned venue, above what may have been a warehouse or a market place (the outside was almost pitch black on the night) entered up a long metal staircase on the outside. Senyawa deliver what could only be described as an invocation of demons from some obscure hell portal via Rully Shabara’s throat. 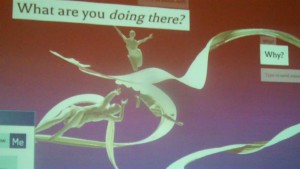 Dom Omladine, the city’s most formal music location, seemed incredibly tame by comparison on the other nights. Olga Bell and Emika taking up the cause for women in electronic music (is that even a thing worth mentioning still?). Both of whom also gave talks during the festival.

If you’ve heard Blixa Bargeld’s adverts for the German DIY company Hornbach knows the man has gravitas and vocal scope equal to any German actor (let’s not mention Klaus Kinski). So it’s no surprise that, as the headline act on closing night, the only instrument he has is his voice and a delay machine, and excellent sound man. Taking us out from Earth, across the solar system in a gradual building of Bargeld-made sounds, the result was impressive to say the least.

Fennesz & Lillevan, by comparison, felt like such a mainstream performance, despite the guitar work, electronics and impressive visuals. There’s a lot there but at times, and this is true of much electronica that makes use of guitars, it borders occasionally on prog-rock tropes. Lenhart Tapes, with a mixture of loops, muslim chants and again heavy-metal guitar tropes, is more fun and free, attempting to crash everything together and see what comes out.

Resonate’s development is also the growth and expansion of the digital arts scene. At times chaotically organised and under-funded, it still maintains an air of enthusiasm and self-awareness, always willing to embrace newcomers.

Resonate takes place every year during April, in Belgrade, Serbia.