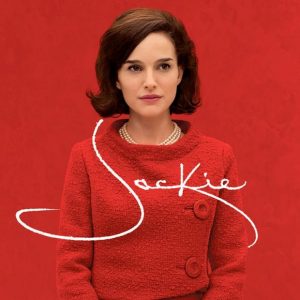 There are no uplifting, emotional highpoints in Mica Levi’s soundtrack for director Pablo Larrain’s Jackie. As you might imagine from the composer of Jonathan Glazer’s Under The Skin (2013), Mica Levi’s compositions are as much about the unseen, unspoken, as they are about those gleaming gravity wells of emotion that filmmakers work so hard to draw us towards. In Jackie, Levi finds space to further explore those spaces and the subject matter gives over to it so well.

As with Jackie Kennedy’s own, post-assasination life, there’s no release from the existential pain of loss here, and even Tears, at, 54 seconds, refuses to give in to the weight of human suffering. As though it would be too human to reveal emotions for too long. On Walk to the Capital, s the strings suggest a nation sobbing around Jackie, even as she refuses to release her grip on her stoicism under public scrutiny.

The stageplay of Camelot (by Alan Jay Lerner and Frederick Loewe), starring Richard Burton, was a favourite of the Kennedys. They often played it at the end of the day and in many ways it became a symbol of the Kennedy era. As the only other music in the film, this 1960s soundtrack should feel at odds with the contemporary Mica Levi: yet it feels appropriately juxtaposed with her drone-like compositions. Perhaps this is because there is a subtle hint of the strings from that musical echoed in Empty White House track. The final track on the album, Credits, has short xylophone motifs running through it, hinting again at the Camelot references.

None of which is to say that Levi has merely paid homage to another soundtrack. This is music very much rooted in the performances of the film and echo so much of the underplayed emotional range that Natalie Portman uses in the title role. As has been hinted at elsewhere, as much as the soundtrack is an emotion guide to the film, in the mode of more traditional soundtracks, this one is very definitely a character with a protagonist’s in the film.

It would come as no surprise if Levi’s next soundtrack was for a film set in outer space, (but perhaps one directed by Cronenberg?) Her sliding, drone-esque work marks out the spaces and distances that exist between ourselves and every other human being. The gulf that means we’ll never truly connect, just as Jackie Kennedy in the film never truly connects with anyone else: children, friends or otherwise. Despite there being an intellectual pleasure to be taken from enjoying the Jackie soundtrack, there’s no easy answers for anyone looking for escapism. If Jackie seems to hint at the dying light of one brief moment that was Camelot, it’s hard to imagine a more relevant film and soundtrack for the rise of fascism in Trump’s current Presidency. While some old rockers look to guitar heroes for songs of rebellion, maybe Mica Levi’s strings are the better accompaniment to our dying light of contemporary dreams?