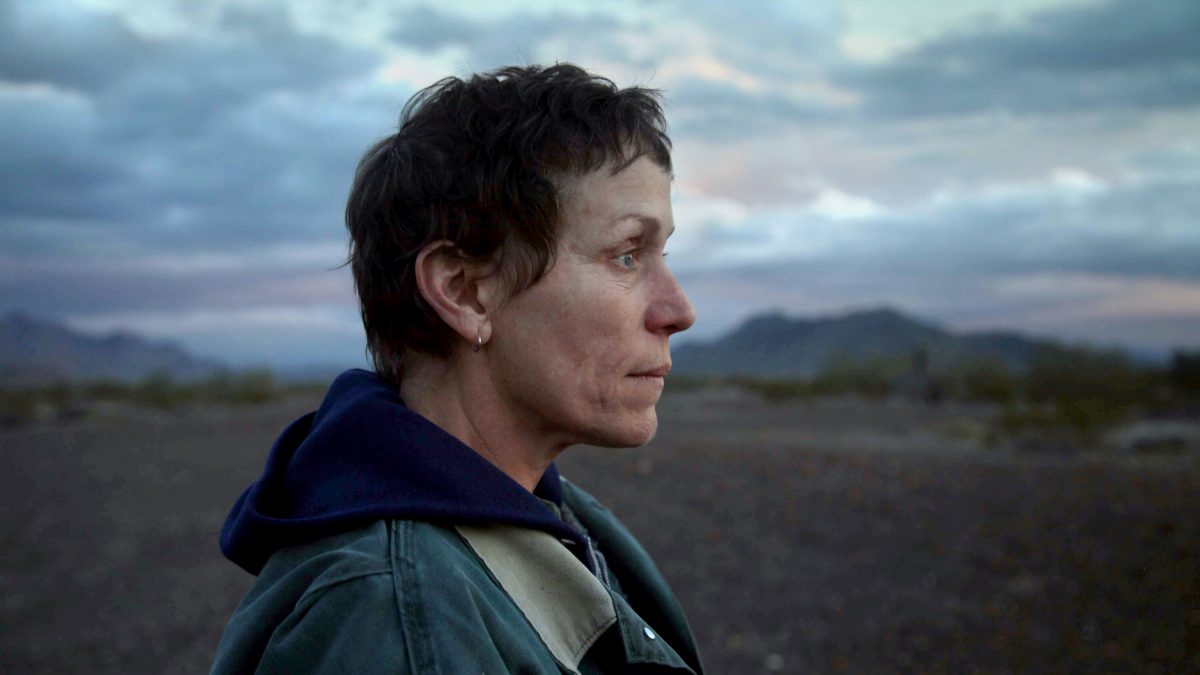 Nomaldland scours the American landscape, lifting the rocks and scraping at what clings beneath to survey what’s left behind as the great American Dream rolls across the country.

Blending documentary and scripted drama, Nomadland encapsulates the essence of capitalism with a softer hand than might have taken place in pure documentary format. It tells the story of what happens when a community based around a single enterprise (in this case Gypsum mining) moves on when there’s no more mining to be done. Or as is often the case, the shareholders can no longer rinse huge profits from the enterprise.

Chloé Zhao film doesn’t position the characters as victims of capitalism though. Rather than continually layering despondency on the circumstances they find themselves in, she allows the character we meet (fictional and real) to frame their circumstances as a sort of On the Road for the 21st Century. These are a disconnected informal nation of people who through differing circumstances have fallen out fo the American Dream, but refused to bed down back into it. They take to their camper vans to travel the country: meeting at predetermined locations or drifting off in different directions when it feels like a social situation too reminiscent of what they’ve escaped is forming.

Few (Hollywood) actors could deploy the subtle nuances needed to capture the emotional power of a film like Nomadland. (possibly Kate Winslet, at her best in recent Mare of Eastown?). While Frances McDormand has always been cast as the everywomen of American culture in many roles, the reason is obvious in Nomadland. She represents solid working-class grounded practicalities along with the emotional range to hint at something going on deep within her character, that we can only guess at. Her portrayal of Fern, widow and former substitute teacher, now taking zero-contract jobs in Amazon warehouses or diners takes us from the practical, realistic and empathic engagement with the people she meets on the road, to the merest hint that, either before or since being away from social niceties, she’s become a changed person.

Many of the people she meets are those thrown into their vans by the 2008 financial crash. Their acceptance of their fate could have led to resentment anger and fatalism. Instead, there’s an awakening to the real necessities of life. How much does a person need the latest mobile phone? How vital is it to have ‘things’? To be in possession of the by-products of modern economies always driving forward, almost hysterical desperation to make us consume?

Fern’s sister comments that Fern is living a similar lifestyle to the first (European) settlers in America. But the film’s connection with the past is a tighter loop than that. This is a 20th-century idea of American freedom, out of the city and roaming the great American land.

If Nomadland lacks anything though, it’s some reference to the original owners of the land, and what happens when a new nation travels across the ocean and decides to decimate their land.

In some ways, these Nomads are the American Dream, but the dream of freedom and desire to create a nation based on their own rules and to explore what lays beyond the last house on the last street in the town on the edge of the desert.